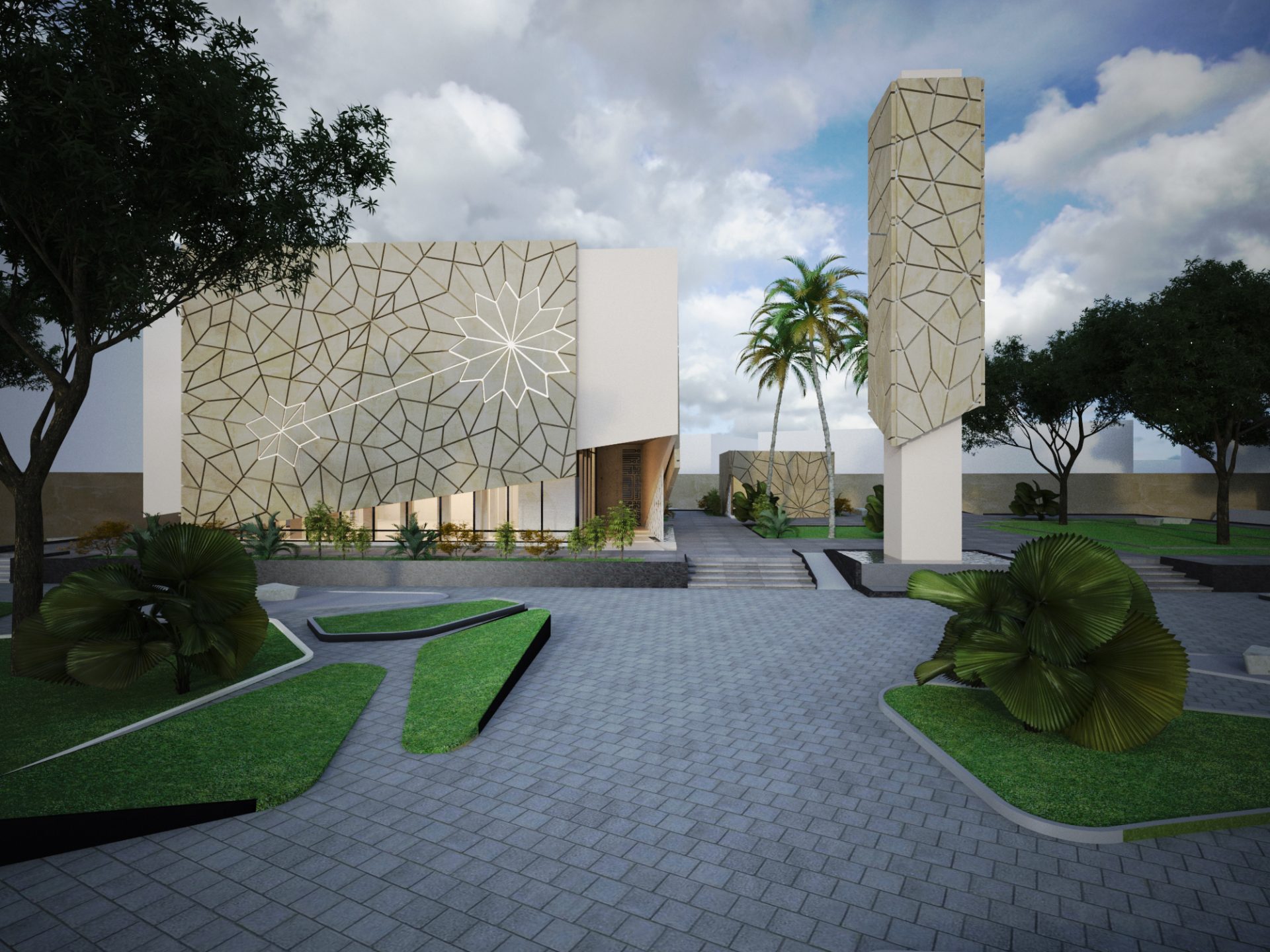 Mosques are a hallmark of traditional Middle Eastern and Islamic architecture. They are reflections of the regions rich, beautiful history. They are more than places of worship. Mosques are landmarks in the desert. The call emanating from their minarets beckons to pray, to reflect and to come together as a community.

Designing a mosque in modern times must pay homage to the heritage of traditional Muslim architecture but must also bring in features of modern architecture.

The Al Duraibi Mosque in Buraidah, Saudi Arabia is an example of a marriage of tradition with current aesthetics. Using the traditional geometric tessellating mosaic as a prominent motif, this mosque is a study in lines. Generally, lines add concentration and movement to a feature, manipulating our perceptions of space. Vertical lines are used to add height to a building. Horizontal lines add width and direct focus. Diagonal lines add movement. Curves are used to create harmony. With the Al Duraibi Mosque, this sleek, modern mosque has opted for patterns of straight, mostly diagonal lines. These come together to create an eye-catching geometric pattern on the exterior.

The main hall of the Al Duraibi Mosque is a partnership of aesthetics and acoustics. The lined pattern of the mosque’s exterior is recreated here on the ceiling, in 3D. The bumps and grooves of the ceiling add visual weight and texture. In the middle, the ceiling meets in a dome. This is in keeping with conventional mosque structure. It also serves to mute any echoes. This is essential for prayer rooms as they are high traffic areas with a lot of noise.  Coupled with the carpeting, the domed ceiling serves to keep sounds within the main hall.

To offset the geometry, curves have been added throughout the interior of the mosque. A colonnade of arches is featured in the main hall. This adds a point of focus to the room.  A feature of the mosque bathrooms is a crescent moon accent to the mirrors. The gentle curves offset the modern geometrical theme and soften the atmosphere of the mosque. This is also a creative way of giving a nod to the traditional crescent moon Islamic motif. This sets the scene for reverence and prayer, and invites contemplation.

The Fazaiya mosque is a communal Mosque for Fazaiya Housing Society Lahore, for about 250 – 300 people. The angular walls project to augment the play of light into the building. The key features of this structure are the slanted walls and the skylight where the sunlight penetrates through the ceiling and casements. The Planning has been divided into three zones, the Praying hall, Ablution Area, utilities and in between these two zones lies the Entrance.

The absence of dome and the emphasized feature of Minaret which serves as a skylight, brand this as a proposal holding monumental value. The location of minaret above the entrance hall extends a warm welcome to the attendees at the mosque.

Mosques and traditional Middle Eastern architecture often have softscape areas. The natural curvature of plants outside the mosque’s main feature wall softens the aesthetic. The greenery adds a natural harmony to the mosques and makes them feel warmer and more inviting. Natural elements are added throughout the mosques, with a modern twist. The walls along with their material elements add a natural warmth and texture. Wood has a very grounding effect, and brings us closer to the earth so it serves as a fantastic addition to a room of prayer and contemplation.

A defining feature of mosque architecture is the minaret. This is where the call to prayer takes place. In keeping with modern geometry, the minarets of our designed mosques are a sleek study in lines.  The minaret also has to have acoustic capabilities. The call to prayer must be able to reverberate in the surrounding neighborhood.

A minaret needs to be easily definable – a calling card to the location of the mosque.

Collage Consultants WLL have the deft and ability to bring tradition together with modern aesthetics. We are quickly moving forwards into a busier and faster paced style of living. So, it is important to reflect and give contemplation to the tradition that has brought us here. With the Al Duraibi Mosque and the Fazaiya Mosque , we have created spaces that both appeals to the modern eye , while, standing firmly rooted in beautiful Islamic tradition.

Zuraiz believes that architecture should inspire those who interact with it, it should be comfortable, compelling, and energizing, and above all else bring joy to those who experience it. It should engage the site and provide warmth through scale, texture, color, and materials.

Any cookies that may not be particularly necessary for the website to function and is used specifically to collect user personal data via analytics, ads, other embedded contents are termed as non-necessary cookies. It is mandatory to procure user consent prior to running these cookies on your website.